In the spring of 1994 John Jarvis - a Uniroyal Salesman, PMA Golf Chair and all around good guy - was struck with brain cancer. He was at every spring meeting with the expressed intent of playing golf with as many people, customers, or competitors as possible. I recall the fall meeting in Charlotte in 1991, where he had me there to participate with others in 8 rounds in 5 days. He was truly your best friend when you were with him.

Whether in meetings, on sales calls, on the golf course, at dinner, or at the bar, John would light up the room with jokes, tricks, fun, and compassion. He shared his faith in man and God on a daily basis. His tales of the exploits at the Master's or other tournaments are legendary. He cared for everyone the same with a smile and a wink.

The PMA golf tourney was his organization's reason to be at the meetings, even though the meeting was "out of his territory." He made fair teams and won only once to my knowledge in the 15 years he did the golf outing. And he was chastised severely for winning that year with a very weak team.

Unfortunately, the brain cancer, even after the two surgeries, was too much for him to continue on. I was at the hospital, (Mother Cabrini/Columbus Hospital, in downtown Chicago) the night before he passed. He was tired, but knew there were better things to come. And with a smile on his face he said to me, "I'll see you again in a little while!" A true friend to the end, and everyone who had met him is a better person for it. 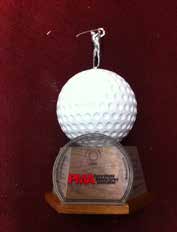 CUMA's golf tournament dates back to 2004. Members wanted bragging rights, and it was decided that a trophy was the ideal way to encourage the friendly competition. Andy McTear, Prothane, donated an oversized golf ball which his father had previously used to store scotch, and it was turned into the trophy.

CUMA's tournament has been held every two years. The winning foursome's names are added to the trophy and it travels between the four – each keeping it for two months at a time. PMA has decided to keep this tradition alive and the traveling trophy will now be a part of the John Jarvis Memorial Golf Outing in the years to come.

I hope to get every company's name on this spectacular trophy. Best of luck to all!